Runs in the Family (Reprise)

(Original: January 1992). “If you’re going to tell a lie, tell a whopper,” yells Dr. Mortimore as events begin to spin deliriously out of control in Ray Cooney’s It Runs in the Family (originally presented by the Company in 1992). Inadvertently, he’s identifying, in the midst of his panic, the motor that propels all the best farces. Deception, mistaken identities, double-entendres, puns and flapping doors fuel this high octane comedy. Set in the doctor’s lounge of a London hospital three days before Christmas, the staff is preparing the annual holiday show. But that is only the sideshow. The real business is a conference of neurosurgeons. As Dr. David Mortimore is preparing his lecture (that should guarantee him a knighthood and the hospital some badly needed funds), a former nurse bursts in with the news that their fling some 18 years and 9 months ago made Mortimore a father. The boy (emotionally high strung and under arrest for driving under the influence) is downstairs, desperate to meet his long lost Dad. Now the good doctor really practices what he preaches. Lies pile on lies, as he enlists his colleagues to deceive his wife, his boss, a police sergeant and even his newfound son. Sharp syringes, crashing wheelchairs, squirting seltzer bottles, doctors in nurse drag, and window ledge wrestling matches gear the farce into overdrive. This performance ran in Dodge City from February 6 – March 1, 2003. 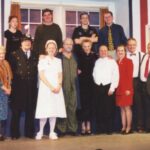 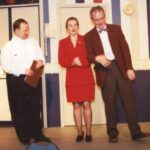 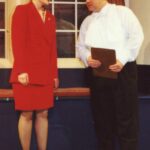 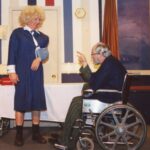 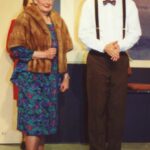 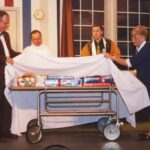 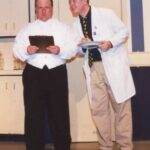 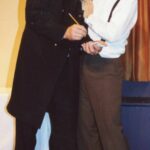