In 1984-1985, the Dodge City Boot Hill Museum Repertory Company was located at Boot Hill Museum. “Dames at Sea” was performed in spring of 1985. An Off Broadway hit that brought stardom to Bernadette Peters, the play was a campy show based on the nostalgia of Hollywood musicals of the 1930’s. The story focuses on big-time New York City, into which sweet little Ruby from faraway Hometown, U.S.A. has come to make it big on Broadway. Who should she chance to meet but another boy from Hometown, U.S.A.: Dick, a sailor, who also has ambitions as a songwriter. Ruby begins in the chorus, and by the end of the day, in true Hollywood fashion, Dick saves her doomed Broadway show with a smash tune, as Ruby becomes a star on the deck of a battleship.The cast of “Dames at Sea” included Candy Pyle, Brian Richardson, Don Pfister, Greg Smith, Karen Warshaw, Jill Austen, Jana Ross, Mischel Raney, Cyndi Hudnett, and Theresa Eades. The play ran from February 22 – March 2, 1985. 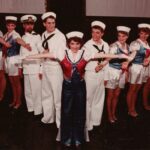 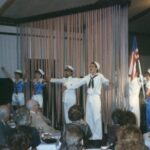 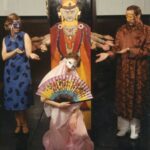 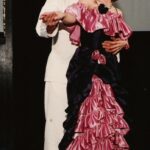 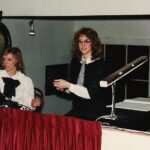